Part memoir, part history of comics, Supergods is my book of the year. Technically, it's the book of last year though I'll give it this year as well because it's that good. And even with a solid four months left on the calendar, I am calling it. There's a palpable energy here, a thoroughly present and informed enthusiasm that builds to a kind of spiritual expansion by book's end. Morrison starts at the beginning, the dawn of comics. The Golden Age, the Silver Age, through fandom and career, he explains everything along the way and this is important. As inside(r) as it gets, reader, you are never at a loss or confused. This is about inclusion, drawing you in, telling you what you need to know and making you see the magic picture. Morrison puts the arm of his brain around you!

Beyond philosophy, mythology and the more abstracted realm of discussion, there is lots of enjoyment to be had in the very correct descriptions: 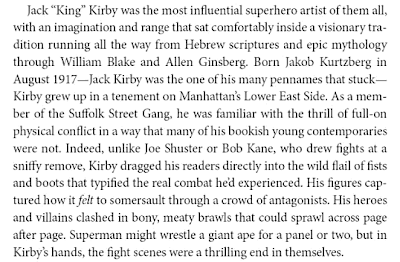 There is a wonderful parallel to be had in graphing your personal history alongside the history of comics. The evolution of self, the march of progress. It bears mention that the full title is Supergods: What Masked Vigilantes, Miraculous Mutants, and a Sun God from Smallville Can Teach Us About Being Human. 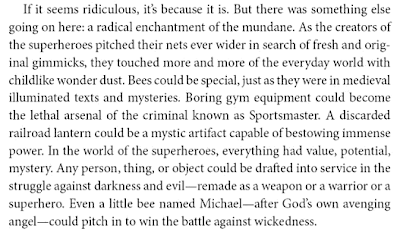 The New York Times review warns that, "Morrison can be a spirited writer, but he is also prone to overstatement and hyperbole," which is a hilarious complaint to lodge. Hyperbole is what you sign up for when you read Morrison! The review goes on to frame the book as a "missed opportunity" and take it to task for not being enough of a thoughtful examination, particularly on the state of the comics industry today. Truly, I don't understand it. Supergods is deeply multidisciplinary and exists as a storyteller's story about storytelling. It is literally magical. And at its end, kindly reminds us how we are surrounded by the wondrous and calls on us to decide where to go with our world-building.
Posted by Alicia at 8/26/2012 12:46:00 PM