"Having just enough imagination to carry him through each successive day, and no more, he was tranquilly sure of himself; and from the very same cause he was not in the least conceited. It is your imaginative superior who is touchy, overbearing, and difficult to please; but every ship Captain MacWhirr commanded was the floating abode of harmony and peace. It was, in truth, as impossible for him to take a flight of fancy as it would be for a watchmaker to put together a chronometer with nothing except a two-pound hammer and a whip-saw in the way of tools. Yet the uninteresting lives of men so entirely given to the actuality of the bare existence have their mysterious side. It was impossible in Captain MacWhirr's case, for instance, to understand what under heaven could have induced that perfectly satisfactory son of a petty grocer in Belfast to run away to sea. And yet he had done that very thing at the age of fifteen. It was enough, when you thought it over, to give you the idea of an immense, potent, and invisible hand thrust into the ant-heap of the earth, laying hold of shoulders, knocking heads together, and setting the unconscious faces of the multitude towards inconceivable goals and in undreamt-of directions."
Posted by Alicia at 6/29/2012 11:11:00 AM 1 comment:

The Diary of The Travelling Bookbinder

The Price of Salt, Patricia Highsmith 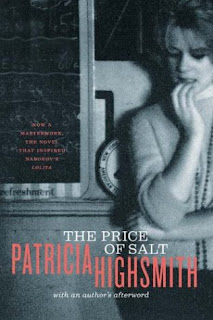 It was all things. And it was one thing, like a solid door. Its cold sealed the city in a gray capsule. January was moments, and January was a year. January rained the moments down, and froze them in her memory; the woman she saw peering anxiously by the light of a match at the names in a dark doorway, the man who scribbled a message and handed it to his friend before they parted on a sidewalk, the man who ran a block for a bus and caught it. Every human action seemed to yield a magic. January  was a two-faced month, jangling like jester's bells, crackling like snow crust, pure as any beginning, grim as an old man, mysteriously familiar yet unknown, like a word one can almost but not quite define.
Posted by Alicia at 6/22/2012 12:21:00 PM No comments:

Here at Brooklyn, we are without cat. As they are an essential component of any perfect bookstore, we have a paper cat taped to the wall behind our counter. A sad but necessary salve. However! Today, I realized we can also have a Store Cat GIF and that has made everything all better. This one comes courtesy of Forgotten Bookmarks.
Posted by Alicia at 6/19/2012 12:35:00 PM No comments:

Email ThisBlogThis!Share to TwitterShare to FacebookShare to Pinterest
Labels: cats

The Underground New York Public Library is a visual library featuring reading riders of the NYC subways. Ourit Ben-Haim talks here about what inspired her to start this amazing project.
Posted by Alicia at 6/14/2012 02:50:00 PM No comments:

Things You Find, When You Look

More pictures of the stores like this, please. All of them. I am serious.

We just talked about dolls for ten minutes in here. Do you know about The Stettheimer Dollhouse? It's amazing.
Posted by Alicia at 6/07/2012 04:45:00 PM No comments: