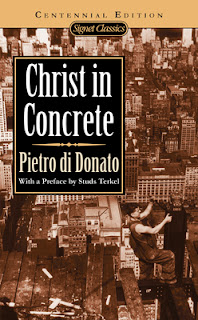 Saturday morning.
He could not possibly pause long enough to breathe normally. Job that day would never be forgotten: the day when Job would first give its holy communion of freedom. One-on-two-one-on-two-bend-scoop-swing-spread-tap-clip—and bend on for one-on-two—and now Job was no longer a bewildering corridor which one visited by chance and did not realize. Job was establishing itself in gray of stony joint and red of clayey brick, in smell of men's gray bones and wet red flesh.
Job was becoming a familiar being through aches and hours, plumb and level. Job was a new sense which brought excitement of men and steel and stone. Job was a game, a race, a play in which all were muscular actors serious from whistle to whistle, and he was one of them. It was pay-day, and in a few hours pay-check would sign short-short armistice. It was war for living, and Paul was a soldier. It was not as in marbles where he played for fun, it was men's siege against a hunger that traveled swiftly, against an enemy inherited.
Posted by Alicia at 5/02/2012 04:56:00 PM