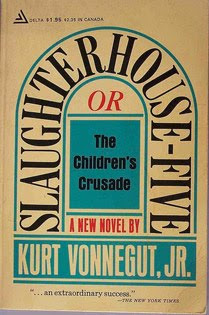 In Missouri this Monday, the Republic High School board voted 4-0 to remove both Slaughterhouse Five and Twenty Boy Summer from their curriculum and library. The vote came in response to a public complaint filed last year by Wesley Scroggins. Galleycat linked to a letter he penned challenging use of the offending Vonnegut and Ockler. Laurie Halse Anderson was also named (for Speak) but the board voted against its removal. Ockler has since responded to the decision.
For the record, I read Slaughterhouse-Five when I was in high school. At my local library. So I routinely refer customers to their branch. A free library is the cornerstone of democracy and with #thankyoulibrarian making the rounds on Twitter this week, I encourage everybody to take the time to thank those working tirelessly to provide open access to information.
Posted by Alicia at 7/29/2011 02:36:00 PM

Email ThisBlogThis!Share to TwitterShare to FacebookShare to Pinterest
Labels: censorship, so it goes