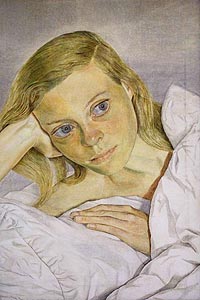 "Her moods tended to deteriorate and become fouler and more petulant in the very pleasant circumstances where she had hoped they might improve. Sitting, unhungry, at dinner parties she would stare at all the expensive foods that seemed to flow on and off her plate in great tidal waves of courses. She viewed her fellow guests with a paranoid rage and horror. She felt certain that she had only been invited because she was generally considered to be pitiable. Whenever anyone tried to speak to her she suspected that they were only making an effort to be kind to her because they realized she was lonely and humiliated. She found their kindness as distasteful as all the rich sauces that smothered the fish and the meat that her hostess kept trying to feed to her."

Email ThisBlogThis!Share to TwitterShare to FacebookShare to Pinterest
Labels: storytellers