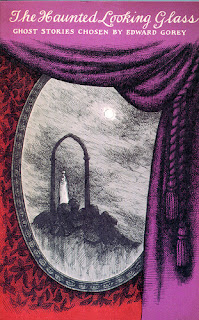 "There was manifestly nothing in the external appearance of this particular house to bear out the tales of the horror that was said to reign within. It was neither lonely nor unkempt. It stood, crowded into a corner of the square, and looked exactly like the houses on either side of it. It had the same number of windows as its neighbors; the same balcony overlooking the gardens; the same white steps leading up to the heavy black front door; and, in the rear, there was the same narrow strip of green, with neat box borders, running up to the wall that divided it from the backs of the adjoining houses. Apparently, too, the number of chimney pots on the roof was the same; the breadth and angle of the eaves; and even the height of the dirty area railings.

And yet this house in the square, that seemed precisely similar to its fifty ugly neighbors, was as a matter of fact entirely different - horribly different."

"The Empty House" by Algernon Blackwood
from The Haunted Looking Glass: Ghost Stories Chosen By Edward Gorey
Posted by Alicia at 4/14/2011 09:25:00 AM