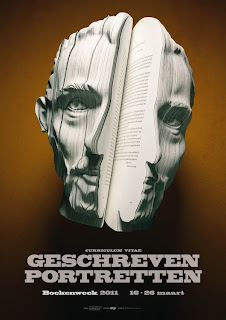 March 16th through 26th is Dutch Book Week. The focus this year is on the autobiography, and the idea of a "written portrait" has been translated into an art campaign featuring works like the one above: books sculpted to look like the faces of their authors. It's a really cool idea, but mostly just makes me think of what a nightmare shelving and finding these things in the store would be, both in terms of difficulty and creepiness. But maybe I would want to read one on the train. [Behance via Gizmodo]
Posted by Kevin at 3/19/2011 12:37:00 PM