So if you're a Kathy Griffin fan, as I am, you have most likely seen her stand up on Bravo, along with My Life on the D-List, and most likely read her amazing book, Official Book Club Selection: A Memoir According to Kathy Griffin. However, nothing beats seeing her live... 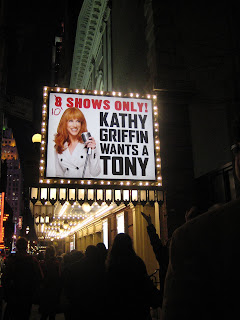 Last night I had the great pleasure of seeing Kathy Griffin's newest adventure, Kathy Griffin Wants a Tony. Now for anyone who likes or follows Kathy Griffin, she is definitely a gay icon and a gay rights enthusiast. This is what makes her unbelievably unique and wonderful. Only Kathy Griffin would go to gay rallies as an actual celebrity (let's face it, even if her life is on the D-List, she has definitely reached A-List standards with two Emmys, a Grammy nomination, and soon a Tony nomination).
When I walked into the theater, I was welcomed by the sublime I Whip My Hair (Willow Smith) only to be followed by Believe (Cher) and Alejandro (Lady Gaga). Her merchandise is everywhere, fans are filing in. They start to get excited when Tiffany, Kathy Griffin's assistant, comes onstage to pour the first water bottle into her cup and straw. The room goes black and the fans go wild. Her show starts with clips from people talking about her, her shows, her stand-up and interviews. One interview being when she was on The View, where the super conservative Elizabeth Hasselbeck questioned her saying, "You said things about people here, that were A: untrue and B: not so funny, so do you ever feel weird coming and sitting here...?" To which her reply was: "Actually, this moment is what I live for, so bring it." Then, a montage of celebrities introducing her: Rosie O'Donnell, Cloris Leachman and the infamous Bette Midler.
The first thing you notice, at least that I noticed, about Kathy Griffin is how unbelievably tiny she is. Her first words were, "HELLO NEW YORK!" followed by, "Oh take my picture, break the rules, I don't care". Then it became the typical but always amazing Kathy Griffin stand-up routine including her Whitney Houston and Oprah impressions, which I have to say made the night complete for me. She also talked about the infamous, always winning, tiger blooded Charlie Sheen. 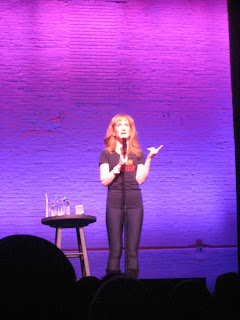 What made the night amazing was her constant talk on Sarah Palin and the Tea Party. One story involved Michele Bachmann and her involvement in the Tea Party. Kathy was attending the Radio and Television Correspondents' Dinner, where she ran into Bachmann on an escalator. That is when Bachmann's assistant pulled a flip camera out and asked Kathy what she was doing at the dinner. She asked Bachmann about joining her in the campaign to have Don't Ask, Don't Tell revoked. Bachmann, of course, replied no. Kathy Griffin, being her lovable and hilarious self asked Michele Bachmann, "So, were you born a bigot or did you just become one over time?" Her reply, "I don't know..." Kathy tried again, "Okay, let me rephrase: since you won't join me in gay rights, were you born a bigot, or did you just become one, environmentally?" And this is where I really start worrying about people that share her politics because the reply to this question? "That's a good question. I'm going to have to get back to you on that one."
She had many things to say about New York City. I believe her best story involved the rain we had last week. Apparently in Los Angeles when it rains, shows are canceled and no one usually shows up, but of course that is not the scene in NYC. When it rains, Kathy Griffin likes to wear a shower cap from the hotel, so her hair doesn't get wet, which is completely 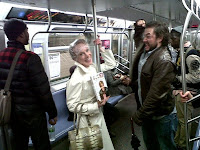 understandable. She starts with, "I love how when it rains, the streets are like graveyards for umbrellas". Then she starts talking about how she is walking with her Team Griffin down the street, sees an umbrella on the ground and thinks, "Oh man someone lost their umbrella." Then she continues to walk and sees more; then "I see a man in front of me whose umbrella gets blown inside out and he just throws it at a window!" She later comments, "I love how you guys just stack broken umbrellas on trash cans, like its okay... yeah, it's fine there." Then because the rain was so heavy, they decide to take the train. She said "I believe it was the F train" (which lead to an uproar from the side of the theater) "Oh shout out... they are like, oh that is my train!" 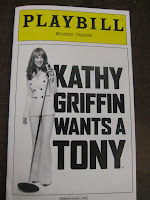 This show was absolutely amazing; Kathy Griffin can make my sides hurt for hours. She is truly talented and hilarious. If you get a chance to see the show and you are a fan, GO! Yes, tickets are a little pricey, but it is worth it for the two straight hours of complete comedy. The best part is that she's not scripted. She told stories about things that happened that day and she was super communicative to the audience. If you're lucky, she will even sign your Playbill outside the stage door.
She is performing at the Belasco Theater on 44th Street between Broadway and 6th Avenue. You can purchase tickets at the box office or online at telecharge.com. If you want a laugh from a great source of entertainment, get a ticket.
Posted by Kaitlyn at 3/15/2011 11:30:00 AM