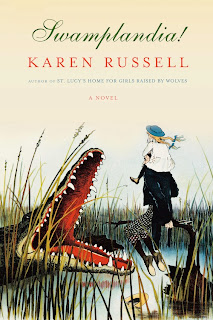 Please join us at Brooklyn College as we set up a table alongside the spectacular Karen Russell and Melissa James Gibson. Russell is the author of Swamplandia! and St. Lucy's Home for Girls Raised by Wolves will be reading and signing copies of her books. She appeared on the New Yorker’s 20 Under 40 list, and was chosen as one of Granta’s Best Young American Novelists. Her stories have been featured in The Best American Short Stories, Conjunctions, Granta, The New Yorker, Oxford American, and Zoetrope.

Melissa James Gibson is a playwright. Her many works include This (Susan Smith Blackburn Prize finalist); [sic] (OBIE Award for playwriting, Kesselring Prize, The Best Plays of 2001-02); Suitcase or, Those That Resemble Flies From a Distance (NEA/TCG Theatre Residency Program for Playwrights); Brooklyn Bridge, with a song by Barbara Brousal (AT&T Onstage award); and Current Nobody (Susan Smith Blackburn Prize finalist).
Posted by Alicia at 3/14/2011 08:00:00 AM

Email ThisBlogThis!Share to TwitterShare to FacebookShare to Pinterest
Labels: signing