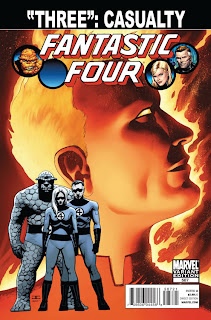 This past January saw the death of the Human Torch at the conclusion of the "Three" storyline. While not as big a deal as the unmasking of Spider-Man or the death of Captain America, both of which grabbed big headlines, the death of the Human Torch, as written and drawn by the surprisingly adept Jonathan Hickman and Steve Epting, has proven to be an unusually touching entry in the plot driven genre of superhero event comics. The unmasking of Spider-Man and the death of Captain America were the endcaps to Civil War, Marvel's potentially interesting but failed attempt to inject realpolitik into the Marvel universe. As is typical of the life cycle of superhero comics, those two big changes have since been reversed, the former by the devil(!?) and the latter by… time travel? clones? I'm not really clear what happened there, but everyone's favorite WWII veteran is back slinging the shield around. And, as near as I can tell, the most lasting change Marvel's Civil War brought about is a marked increase in the number of press conferences written into Marvel event comics. 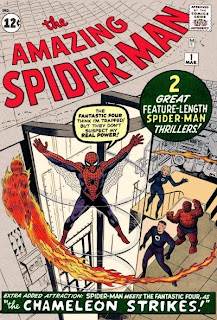 The Human Torch is due to be replaced in the FF family by Spider-Man in the FF #1 series reboot due out this coming week, a development 48 years in the offing. The observant will note that the publication date of The Amazing Spider-Man #1 was also March; the even more observant will note that this coming November marks the 50th anniversary of The Fantastic Four's first appearance, which would make an excellent opportunity for a reunion of Marvel's first nuclear family. Until then they'll be wearing new costumes that look a little too much like they're going to work in a clean room. This will also be the second redesign of Spider-Man's costume this month, though I am a much bigger fan of this Fantastic Four costume for him. 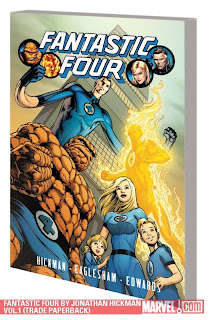 While the change in status quo will likely not last past the end of the year, the current storyline is well worth your attention. Starting back in FF # 570, collected in Fantastic Four by Jonathan Hickman, Vol. 1 (the "Three" storyline is due out in volume four this April), with the dizzying story of what happens when Reed goes to his room of one hundred ideas to change the world and attempts #101: "Solve everything." Reed activates an amazing machine(!) and joins the continuum of all the possible Mr. Fantastic's who have ever attempted so bold a plan. There are Reed Richards with all of the cosmic ray granted powers of his family; three different Mr. Fantastics with the godlike omnipotence of the Infinity Gauntlet, one of whose green cloak and armor looks more than a little like a certain Latverian statesman's; and finally, a Reed who is simply an ordinary man who shows him the true cost of his hopes and ambitions. Hickman takes the disparate elements of the world of the Fantastic Four and uses them brilliantly to tell the poignant story of the kind of man a transhuman genius chooses to be.
Posted by Peter at 3/19/2011 08:16:00 PM