Too Rich To Fail: Shakespeare and Money in America 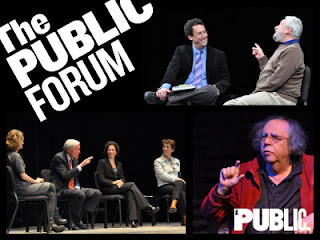 Okay, this sounds fascinating. This coming Monday, February 28th at 8pm, The Public Theater is holding an event called "The Public Forum: Too Rich To Fail, Shakespeare and Money in America".

To coincide with the Public's production of Timon of Athens, Shakespeare's timely tragedy about a man who loses and gains a fortune, The Public Forum explores the power of money in America, the land of million-dollar bonuses, credit-card debt, and more. In the first part of the program, Richard Thomas, the stage and screen star who's playing Timon, will talk about the role and Shakespeare's views on money with Barry Edelstein, the play's director and author of Thinking Shakespeare. The discussion will be moderated by Randy Cohen, who writes the Ethicist column for The New York Times Magazine.

The second part will be a wide-ranging conversation about the role of money in our lives: the widening gap between rich and poor, the financial crisis, the power of Wall Street, money in politics, why Americans equate wealth and virtue, and more. Participants include Bethany McLean, who writes for Slate's "Moneybox" column and is the co-author of Enron: The Smartest Guys in the Room and All the Devils Are Here, a new history of the financial crisis; David Patrick Columbia, who chronicles the city's elite on New York Social Diary; and Katy Lederer, who worked at a hedge fund before writing a book of poems about money, The Heaven-Sent Leaf, and the memoir Poker Face: A Girlhood Among Gamblers. The conversation will be moderated by the director of the Public Forum, Newsweek senior writer Jeremy McCarter.

You can visit www.publictheater.org for ticket info. A panel talking openly about money and class in America? Yes, please. It can only make for an excellent talk, now more than ever.
Posted by Alicia at 2/25/2011 10:00:00 AM 1 comment:

Writers for the Red Cross

Did you know March is Red Cross Month? It's an initiative to raise funds and awareness for the Red Cross and its work in communities across the country. And while it's a handful of days away, I thought we could start to put it on your radar. Writers for the Red Cross is exactly what it sounds like: an independent group of writers and publishing professionals working together for the cause.

Want to help? Volunteer, donate, bid in the auctions, or talk up all the great work the Red Cross does. If you donate more than $25, WFTRC will give you a free book by one of the participating authors. Of course, you can also choose to simply donate. We'll have a donation box in-store for the month, should you want to drop in and contribute. If you donate, you'll get to pick out an advance reading copy from our galley collection and take it home with you, our small way of saying thanks.
Posted by Alicia at 2/24/2011 03:35:00 PM No comments:

Email ThisBlogThis!Share to TwitterShare to FacebookShare to Pinterest
Labels: #write4red

Turn Your Books Into Cash

Found a questionable pile of books on the street? Are double and triple-stacked shelves still not doing their part to accommodate your growing library? Still not jettisoned textbooks from previous semesters? Are you reading this from a chair made of books? I love reading but books can easily take over your life. One day, you turn around, realize you haven't moved in five years and maybe can't see your walls.

Let me help. Tweet me an ISBN and I'll respond with the value you can expect. We buy books back all year round and if I can save you a trip, you can bring it all in one wheelbarrow at a time. Asking about textbooks? Please just include which college they are for.
Posted by Alicia at 2/22/2011 11:09:00 AM 2 comments:

Email ThisBlogThis!Share to TwitterShare to FacebookShare to Pinterest
Labels: saving you a trip 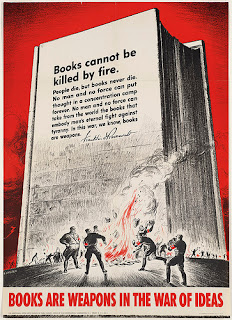 After reading a fascinating article about Armed Services Editions, I had the highly usual response of making my way over to the accompanying Wikipedia entry. It links to the virtual catalog for Books Go To War: The Armed Services, an exhibition that ran at the University of Virginia.

I highly encourage a run through. The university has a near-complete set and the exhibit takes you through the idea of the ASE from conception to production, distribution, and impact. It's an important education in part of publishing history.

(poster via Literature on the Frontlines: The History of Armed Services Edition Book)
Posted by Alicia at 2/22/2011 08:00:00 AM No comments:

Email ThisBlogThis!Share to TwitterShare to FacebookShare to Pinterest
Labels: books are weapons in the war of ideas 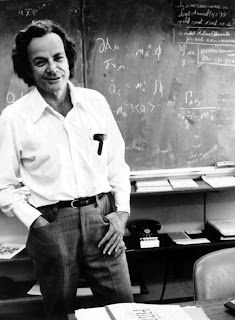 Once I was at a party playing bongos, and I got going pretty well. One of the guys was particularly inspired by the drumming. He went into the bathroom, took off his shirt, smeared shaving cream in funny designs all over his chest, and came out dancing wildly, with cherries hanging from his ears. Naturally, this crazy nut and I became good friends right away.

"But Is It Art?" from "Surely You're Joking, Mr. Feynman!": Adventures of a Curious Character, Richard P. Feynman.

The Students for Free Culture Conference will be a gathering of student activists, intellectuals, artists, hackers, and generally interested people to discuss the latest issues in the free cultural world, with a focus on student involvement and participation.
Interested? Take yourself to the Courant Institute of Mathematical Sciences at 251 Mercer St, New York, NY 10012. On the docket are keynotes and panels on remix culture, open education, fashion and copyright. The second day is an "unconference" where anyone is invited to pose a panel, discussion, gathering, or hack session. Registration is pay-what-you-want, and travel funding is available by request.
To learn more, visit the Students for Free Culture Conference website.
Posted by Alicia at 2/16/2011 12:08:00 PM 2 comments:

Email ThisBlogThis!Share to TwitterShare to FacebookShare to Pinterest
Labels: to do 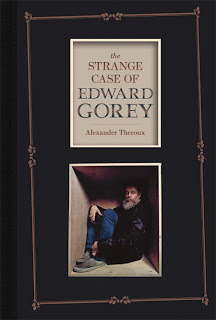 When he was not petting a cat, dramatic gestures, along with heavy sighs or moans, almost always accompanied his highly various conversation.

It would be impossible to choose the one fact I most appreciate learning about Edward Gorey. When tired or upset, he "tended to end conversations, as such, with a hard laugh, a sweeping gesture, a put-down, or all three at the same time." He taped Buffy the Vampire Slayer. He became interested in puppeteering by reading Seneca's plays. He loved puzzles, commercials, the names of places. It is telling that there is but one telegrammatic blurb on the back of this book:
"Just read a few weeks ago your book on Gorey and enjoyed it very much." - Cormac McCarthy, April, 2010

These assemblages in the book, the catalog of preferences, the turns of phrase, the many books referenced, build to as complete a portrait strangers could ever hope to have of such a private and particular man. It's a sideways biography, full of amusing and respectful insight. Theroux's book is a gift and comes highly recommended.

Let me recode this epic for you.


Táin Bó Cúailnge is a legendary tale from early Irish literature, often considered an epic, although it is written primarily in prose rather than verse.

The Man Who Was Thursday, G.K. Chesterton

"Last night, for instance, the tall tenements had seemed to him like a tower in a dream. As he now went up the weary and perpetual steps, he was daunted and bewildered by their almost infinite series. But it was not the hot horror of a dream or of anything that might be exaggeration or delusion. Their infinity was more like the empty infinity of arithmetic, something unthinkable, yet necessary to thought. Or it was like the stunning statements of astronomy about the distance of the fixed stars. He was ascending the house of reason, a thing more hideous than unreason itself."
Posted by Alicia at 2/07/2011 06:27:00 AM No comments:

Email ThisBlogThis!Share to TwitterShare to FacebookShare to Pinterest
Labels: can you trust yourself when you don't know who you are?
Newer Posts Older Posts Home
Subscribe to: Posts (Atom)
We are a local chain of independent bookstores. Our shops are in close proximity to major universities in the NYC area including Baruch College, Brooklyn College, Cooper Union, NYU, Hunter College, Marymount Manhattan College, The New School, School of Visual Arts. All locations are accessible via public transportation. Plus, we buy books all year round.