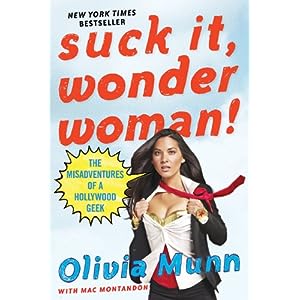 So we received this in a box of advance reader copies generously sent from St. Martin's Press a couple months ago. I picked it up--I don't know why. I mean, I know why. I like Wonder Woman, and there's a pretty girl on the cover. I'm a soft touch in that sense. I didn't know who Olivia Munn was. I have since come to know her as "that girl on that laddish network I don't watch" and "that new girl on the Daily Show". I have alas not come to know her as "that girl who wrote the surprisingly interesting autobiography".
When my employees saw me standing over the box of galleys with this one in hand they clearly thought the idea of me reading Munn's autobiography was just heeee-larious, but the first few pages, about a weird awkward Vietnamese-Chinese air-force brat covered head to toe in Disney licensed clothing and growing up in Oklahoma, were actually kind of arresting, and the more my employees thought it was preposterous that I might read it, the more I wanted to read it. I brought it home and promptly chucked it in a corner and forgot about it.
Fast forward a couple months to now, when the Spring 2011 textbook season is starting and I'm working crazy long days and honestly don't have the energy or attention span for challenging books. Times like these I crave fun books, so it's out with Virginia Woolf, in with Olivia Munn. It was a quick read, but the promise of the beginning doesn't really pan out. About half the book is less biography than it is a collection of not-ready-for-TV bits about how to talk to girls or other disposable nonsense that I think you're supposed to assume is funny even though it isn't--the kind of filler articles you find in glossy magazines for dudes, which I suspect is probably more ghostwriter than Munn herself. And while the rest is ostensibly Actual Biographical Material the true biography peters out by around page 10, and everything after that is really just about the work of achieving and maintaining a solid level of c-list celebrity. Like, once on a photo shoot for a Playboy cover, the stylist was totally an asshole! Okay?
The problem with this stuff is that Munn remains utterly guarded the whole time, and never lets the reader get closer than the average red-carpet interviewer, so it just comes off like hearing a stranger on the train talking about their workplace. Like, can you believe Martin in accounting? Seriously! The nerve of that guy! Also, everybody knows that guy wears a toupee. He isn't fooling anyone.
It isn't all bad though. I do think Munn maybe has a real book in there somewhere. The more candid stuff about just being a weird Chinese kid in Oklahoma with a pretty, blond, blue-eyed sister whom people openly and quite cruelly preferred to her--Munn's still pretty hesitant to go deeper than what is explicitly happening on the surface, but you can see the iceberg below the waters at least. The later chapters, not so much.
Posted by Unknown at 1/29/2011 08:49:00 AM