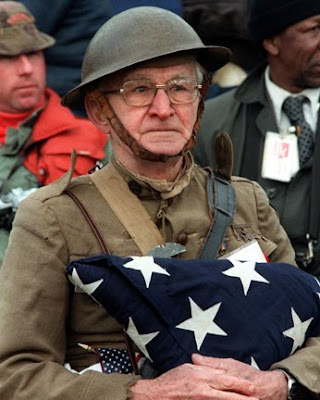 Today is Veterans Day, which always makes me want to start re-reading Ford Madox Ford's Parade's End. But barring that, one thing I've always been keen on is donating reading material to our boys and girls in uniform, and have always been frustrated and flummoxed by the difficulties in just finding places to donate your stuff (for whatever purpose) in an intelligent fashion. MediaBistro's book blog GalleyCat has already scooped us on that one, though, with their post today: Sharing Books with Our Troops, which lists various resources and ways to donate books to our troops. Mostly e-books it seems, which I guess makes sense. When you're humping a 75-pound pack through the roughlands of Afghanistan, it's easier to carry the complete works of Charles Dickens on a thumb drive than in a giant shopping bag of dead trees.

Of these resources, probably my favorite is Operation Warrior Library (can't have any military operation without a snappy acronym). What about you folks, does anyone have a favorite book, military, or book/military charity they like to give to?

[Image of WWI veteran holding the flag of his son who died in the Korean War by Magnus Manske, generously licensed under Creative Commons.]
Posted by Unknown at 11/11/2010 11:27:00 AM

Email ThisBlogThis!Share to TwitterShare to FacebookShare to Pinterest
Labels: charity, donations, our troops