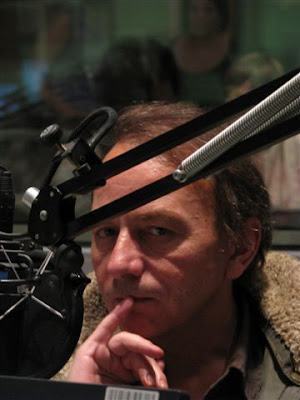 Kooky French writer Michel Houellebecq (pronounced WELL-beck) is in hot water again. Last novel it was because he had said some things about Islam. Now he's written a new novel, La carte et le territoire (The Map and the Territory), and it's because he's ... cut and pasted some things from Wikipedia? Uh, okay. I'm not sure that's exactly in keeping with his image as the "bad boy of literature", but whatever. (Also, for a 54-year-old man to be the "bad boy" of anything is pretty gross. Why do adult journalists insist on continued use of the term?)

Houellebecq, despite his flaws, remains one of my favorite living novelists, but this new controversy seems somewhat, I don't know, what's the word. Ridiculous? The new book, up to now considered a heavy to win the Prix Goncourt, is a satire on the French art world, in which Slate.fr alleges Houellebecq copied large blocks of text from the French Wikipedia's articles on a French hunting activist, the town of Beauvais and the common housefly. Also that he copied descriptions of a police officer from the website of the French interior ministry, and the description of a hotel from that hotel's own website.

In his defense, Houellebecq said ... "Yes, I copied all that stuff from Wikipedia. So what?" He also basically said that most of his critics wouldn't know literature if it bit them on the derrière, and invoked the names of other writers who'd routinely mixed in "real" texts with their own writing, like Argentina's Jorge Luis Borges (whom we here at Shakespeare & Co. adore) and France's own Georges Perec.

While most of the French critical establishment gave the book rave reviews, it has some vocal detractors however, like French-Moroccan writer and notable buzzkill Tahar Ben Jelloun, who is not coincidentally a judge on the Goncourt prize board. He's apparently annoyed that he spent three days reading a book about how a cynical jerk becomes the darling of the art world by photographing outdated Michelin maps. Whatever, after reading Don Thompson's The $12 Million Stuffed Shark: The Curious Economics of Contemporary Art, I'm pretty sure the art world deserves all it has coming to it and then some.

My favorite quote about Houellebecq's new novel from the AFP article on this whole story? "Some critics deduced from its lack of weird sex, misogyny or anti-Islamic rants that Houellebecq might finally be showing a softer side."

I can't wait to read it.

[Image from Wikimedia Commons user Kmarius, aka Mariusz Kubik, generously licensed under Creative Commons.]
Posted by Unknown at 9/17/2010 09:38:00 AM