Will Eisner: A Dreamer's Life in Comics, Michael Schumacher 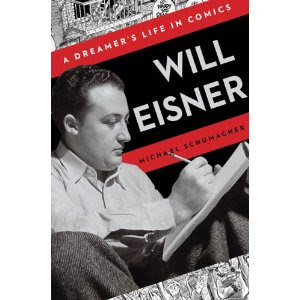 It is officially rush. As the fall semester approaches and our book-army works at shuttling books back and forth all over the store, I find myself thinking about Will Eisner's work ethic. The man was seriously disciplined. Just reading about his life leaves me exhausted.

In addition to everything Eisner, this biography also generally charts comics from its Golden Age through the appearance of the CCA, underground comix and the invention of the graphic novel. Aside from early chapters about his childhood, the second half of A Dreamer's Life was most interesting for detailing Eisner the active, engaged old master. From the business acumen that protected his legacy to PS to his classes at SVA and many, many autobiographical masterpieces, Eisner had plans that begat plans. Also, the enthusiasm and backbone to work them all into fruition. Ultimately, the best part about him as a creator is how much of a fan he is. He never stopped learning about and loving comics.

Email ThisBlogThis!Share to TwitterShare to FacebookShare to Pinterest
Labels: superheroes