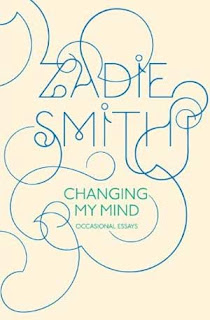 Alright from the beginning I am putting this out there. Do what you want with it. I'm a BIG FAN of Zadie Smith but when it came to her latest piece of work, my excitement dissipated quickly. Essays don't fill me with abject joy but with the premise of Changing My Mind, my attention was grabbed once more. In her book she categorizes her topics in five parts: Seeing, Reading Being, Feeling, and Remembering. To start off, I'm going to summarize the state of seeing.

She begins with her undying admiration for Katharine Hepburn. A woman made for the Golden Age of Hollywood. A woman of one singular idea to the cause of preservation in a society be original, be daring, be resolute, in other words: be a pain in the ass. Ms. Smith recalls that seeing a Kate Hepburn movie makes you realize a couple of things. One, she was a hell of an actress and two, the films made in those days rarely and I mean rarely caused a caustic reaction. To Hepburn the woman you must take it back to Hepburn the child. Zadie recalls heartbreaking moments in Hepburn's childhood that shaped her traits as the straight-talking, trouser wearing tomboy. Hepburn never compromised who she was to please people in Hollywood and in life. Truly an original. I believe Ms. Smith sees Katharine Hepburn as a foundation for the perfect archetypal woman on film. Well, I shouldn't say perfect. How about just a foundation. A foundation for the archetypal woman on film.

Ms. Smith also turns her attention to Greta Garbo. I'll sum up her essay by stating the philosopher Roland Barthes described Garbo's face as a transition between two semiological epochs, two ways of seeing women. Garbo marked the passage from awe to charm, from concept to substance. "The face of Garbo is an idea". Out of all the sirens in the Golden Age of Hollywood, why did Ms. Smith pick Greta Garbo? She's mythic. That face was too perfect to be human. She was cold. No reaction. No feeling. Yet it worked for her. For my money, Ingrid Bergman was it for me. A face too perfect. She was warm. Every feeling itched on the face. It worked for her.

To the multiplex we will go. Zadie Smith got a chance to review movies for a single season in 2006. Memoirs Of A Geisha visually is a feast to gaze upon with its blue grayish light. As a movie on whole, it elicited heartache and headache. Poorly plotted, monotomy, inert, subhuman dialogue spoken in English with a faux Japanese accent. The objection of casting non Japanese actresses in these roles at first seemed like a case of oversensitivity to Smith. But after further thought, seeing as how she could tell the difference between an Irishman and a Welshman from forty paces, it made sense that the casting was off. I completely agree with Zadie Smith in her stand on Memoirs Of A Geisha. It starts with director Rob Marshall. Don't get me wrong he knocked it out of Yankee Stadium with Chicago and I don't even like musicals and that is just it. His talent lies with musical narrative. He knows how to place nuisance within that type of story. You get Ang Lee or even Stephen Daldry for this piece of material. It wouldn't have touched the fairy tale heights the way Pretty Woman did.
Posted by Dante at 7/22/2010 06:53:00 PM