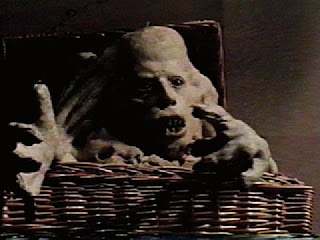 My favorite thing in the world is to read (or really, overhear) the retelling of a movie plot. The straighter people attempt to keep things, the more crooked they go. Really, it starts with a gloriously bad movie and its IMDB entry. From the trivia section ("During the shooting of Terri Susan Smith's death scene the crew became offended and walked out of the production. This would happen again during the director's next film Brain Damage (1988)." Wait, again?!), I can frequently be persuaded to continue to the Wikipedia entry. Spoiler alert, people not on top of their comedic horror game:

An angry Duane picks Belial up and runs furiously on the streets of New York and makes it back to his hotel. As everyone hears his screams and anger they come to his hotel room. There he threatens his brother Belial. An angry Belial grabs Duane's testicles and then lets go. He then grabs on top of Duane and both fall out the window. Hanging from the hotel railing they look at each other then fall. From there everyone comes and looks in sadness and fear and now knows what all the chaos has been for the past three days.

It's so good; I only wish there was more. And there is, but it requires a lot of me. Looking up every movie as I think of it? I'm afraid not. What I really want is someone to do it all for me. I want a Tumblr where I can just go and enjoy synopses of movies. So, do it. My birthday is in September.
Posted by Alicia at 5/04/2010 11:02:00 PM