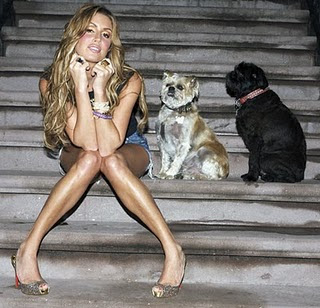 Well it was just a matter of time. I mean you could set it to a timer. Which Tiger Woods mistress would cash in on their part in the most overblown and publicized affair since President Clinton and Monica Lewinsky? It is Rachel Uchitel. Normally, I wouldn't give a damn. If it doesn't affect me in anyway, I go about my business trying not to be assaulted by a police officer for just whistling the theme song to Three's Company, but I felt compelled when I heard the big news. Ms. Uchitel has been shopping around a reality show in which the premise centers around her search for love. She has stated that it is hard for her to date because of her past "relationship". She is equally at fault for irrevocably breaking a marriage and she can now benefit. It irks me that this is where we are at now. The new fame machine. It used to be that some semblance of talent and work ethic put you on the map whether you liked it or not. Now infamy is the new calling card to having all your dreams come true. Come on knock on my --cking door.
Posted by Dante at 4/24/2010 04:07:00 PM 2 comments:

The exciting news this week in the world of booksellers who also dig comics is that Marvel will be moving their book trade distribution to Hachette, distributors of such authors as James Patterson and Alice Sebold. What is most surprising about this move is that, given the massive popularity of Marvel movie properties for the past decade, it didn't already happen.

In the future, you can look forward to a much better selection of Marvel titles on our shelves. Maybe now, the Punisher will stop scowling: 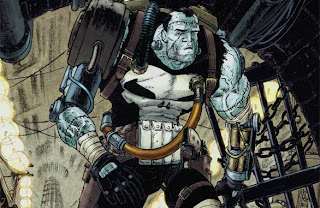 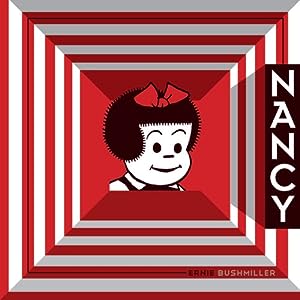 Batman & Robin: Batman Reborn has been out and circulating among every set of hands at the store. It's been an exceptionally good quarter of a year for comics and comic art books. There's been the Art of Steve Ditko and Wednesday Comics and, and, and! There's plenty more to come in 2010, most notably Nancy Is Happy: Complete Dailies 1942-1945. I have been waiting most of my adult life for this book. For real. Ernie Bushmiller was a genius. The appeal of Nancy is perhaps summarized best by Scott McCloud:
Ernie Bushmiller's comic strip Nancy is a landmark achievement: A comic so simply drawn it can be reduced to the size of a postage stamp and still be legible; an approach so formulaic as to become the very definition of the "gag-strip"; a sense of humor so obscure, so mute, so without malice as to allow faithful readers to march through whole decades of art and story without ever once cracking a smile. Nancy is Plato's playground. Ernie Bushmiller didn't draw A tree, A house, A car. Oh, no. Ernie Bushmiller drew THE tree, THE house, THE car. Much has been made of the "three rocks." Art Spiegelman explains how a drawing of three rocks in a background scene was Ernie's way of showing us there were some rocks in the background. It was always three. Why? Because two rocks wouldn't be "some rocks." Two rocks would be a pair of rocks. And four rocks was unacceptable because four rocks would indicate "some rocks" but it would be one rock more than was necessary to convey the idea of "some rocks." A Nancy panel is an irreduceable concept, an atom, and the comic strip is a molecule.
Indeed. Scheduled to release in August from Fantagraphics, it will do my shop-worn copy of Nancy Eats Food a lot of good. Reserve your copy now and by this summer, we can be up to our ears in antics.
Posted by Alicia at 4/21/2010 12:38:00 PM No comments: Everybody! A new translation of The Second Sex is out. People have problems with it but that's okay, because we are all talking about Simone de Beauvoir. And that's a benefit, whatever issues may exist with either translation. For now, it would appear that the only true happiness to be had is in reading the work in its original French form. Still, deckle edges! Also, unabridged.