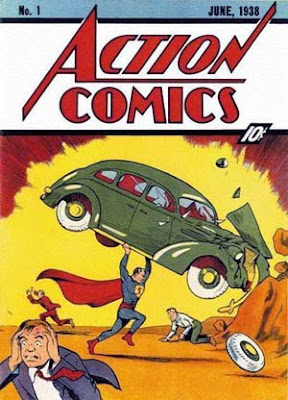 The comic shop is dead-- long live the comic shop! I know people talk about the demise of the brick & mortar bookstore-- & I think they are wrong. I've talked a little bit about why I think that, but this time I want to talk about how I reconcile this with-- well, with my childhood. See, a lot of my formative geek experiences started in a comic book shop. Let me give you some basics. People talk about the death of the comic book shop a lot. About the end of floppy, single issue comics. By which logic they then go on to say that the comic shop model is doomed. & they are always closing...so this is the accepted wisdom. Now, some go on to say that the comic book shop is doomed...unless it diversifies. Places that turn into comic book shops slash video game shops, for instance. Which-- well that brings my back directly to my childhood. See-- the comic book shop of my youth, Capp's Comics? Wasn't some pure, unadorned purist comic book mecca. If it was, I wouldn't have nearly the memories of it. See-- Capp's Comics was also where I went to purchase my role playing books. They had a far better selection than the spotty, picked over (& I suspect, un-picked up special orders) at the bookshop in the mall. Those were the options, in those days, whippersnapper. Besides that, the comic book shop also rented videos-- how else could I have watched Robotech or Akira? & where else would I have gotten that poster of The Sandman, or that Vampire: The Masquerade t-shirt? My point being; the comic book shop was always diversified. & that wraps around! All the way around, to Shakespeare & Company. See, Shakespeare & Company is a bookstore, sure. But it is a bookstore that has a lot of the same potential to be a holy ground for the geek, the little geeklet me. There is a wall of comic books! Sure, not the floppies, but the trade paperbacks, which for my money is where I'd bet on the future going. & you know what? Right above those (last I checked) were the roleplaying books. Your Dungeons & Dragons Fourth Edition stuff. I know we've got the Players Handbook 3 because I hear the others at the store chattering about it. They've got your fix, is what I'm saying. We are the comic book shop-- long live the comic book shop.
Posted by mordicai at 3/15/2010 09:22:00 AM

My favorite comic and bookstore was ceiling to floor pulp and RPG manuals with a backroom of stacked magazines and boxed comics. I discovered White Wolf and Mad magazine there. They would bring up boxes from the basement for me to paw through.

Well hopefully you can make this happen in the new location!

Also: hot icon. I just put Metropolis in my streaming Netflix queue-- I've never seen it! I bet I will really like it.