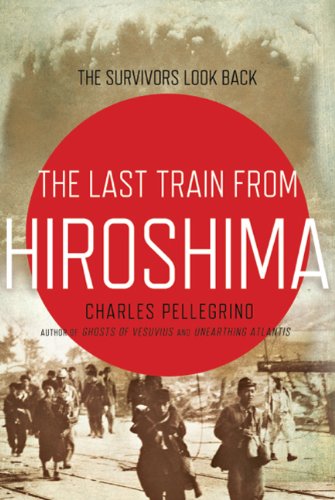 Today Henry Holt and Company, publisher of Charles Pellegrino's historical nonfiction tome Last Train from Hiroshima, about the thirty people unlucky enough to survive the bombing of Hiroshima and then immediately get on a train to Nagasaki, has made the dramatic decision to cease all publication of the book.

Why? This is a book the New York Times called "sober and authoritative", after all. Well, a month after that review, the NYT was ready to call it something else. Substantial sections of the book are based on the recollections of one Joseph Fuoco, now deceased, whom Pellegrino describes as having stood in for flight engineer James R. Corliss on one of the escort planes (called Necessary Evil--who says the armed forces don't have a sense of humor?) that flew with the Enola Gay when it dropped an atom bomb on Hiroshima. It turns out, this substition never happened, and Fuoco was never on the plane, wasn't even in the same unit, and a legion of ticked-off historians and veterans started making noise about it. Initially, Pellegrino said he had been "deceived" by his conveniently kaput source, and Holt vowed to make corrections in future editions of the book. A couple days later, in a narrative that's really familiar by now, it all fell apart.

It now looks like "Dr. Charles Pellegrino" never received a Ph.D. from the university he claims to have. According to the Associated Press and this guy, Pellegrino's supposed alma mater has said of him "Although he did do some PhD study, we can’t find any record of him actually completing or graduating." Uh oh. People started remembering things that have been written about Pellegrino's previous works, such as: "flouts most principles of scientific scholarship" (the NYT, on Ghosts of the Titanic), and "all nonsense" (the Israeli Antiques Authority, on The Lost Tomb of Jesus). Then it looked like Pellegrino had completely made up "characters" who never actually existed, and statements and sentiments from whole cloth. Sez Henry Holt: "We must rely on our authors to answer questions that may arise as to the accuracy of their work and reliability of their sources. Unfortunately, Mr. Pellegrino was not able to answer the additional questions that have arisen about his book to our satisfaction." Aaaand that was pretty much it.

Still awaiting comment from the guy who dug the book so much, he paid his own money to option the film rights.

Conversely, interestingly, I am really not at all bothered by the similar hoopla surrounding claims made in the new biography of the late Polish journalist Ryszard Kapuściński, whose books about conflict in the far corners of the globe I continue to adore unashamedly. According to his biographer, Artur Domoslawski, K was, "often inaccurate with details, claiming to have witnessed events he was not present at ... invented images to suit his story, departing from reality in the interests of a superior aesthetic truth." I feel like everyone kinda knew that already. This isn't the first time K's been called "a fabulist who did not adhere to the basic rules of journalism", and anyway I rather like fabulists. K was a genuinely brilliant writer and I guess I'm okay with lies so long as they're good lies?

I suppose the lesson here is that if you're a writer of no particular literary distinction and the only claim your book has to journalistic greatness (or simply relevance) is that it is the unalloyed truth, you really, really better have some good fact checkers. Or just don't make stuff up that is easily verified as untrue.