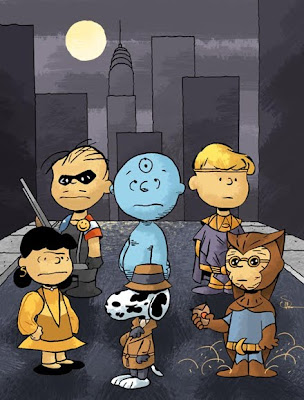 The rumors about Watchmen 2 are seeming to be true. They coincide with Paul Levitz stepping down as President-- Paul Levitz who was very clear on his "no new Watchmen on my watch!" policy. Frankly, I buy it-- it is said to be Dan DiDio's pet project, & frankly, it sounds like him. Unlike other pundits & peanuts on the internet who will just whine about it, I'm trying to think of how you could Sully this disaster to a safe landing in the Hudson. I mean, this is a tricky wicket, touching the venerable monolith & messing with it. Not to mention Moore is going to curse you. I mean, straight up put an evil spell on you. Well, maybe he doesn't go in for black hoodoo, but it is a concern is my point. Gibbons may or may not sign on, but with such overwhelming bad press from the beloved creator, I can see some dark clouds hovering.

One solution, the first solution everyone will reach for, is Grant Morrison. Now, Mister Morrison is a name in his own right, & has the wizardly caliber to put up some decent counterspells & abjurations if Mister Moore declares sorcerous monomacy. & he's shown me that he "gets" the new motif of superheros with his amazing, laudable, excellent in every way All-Star Superman. Seriously, what a piece of art that is. The thing is, he's also shown that he can totally bollocks up a DC mega-event with his confusing, shoddy Final Crisis. So, tricky waters! I say this, then: if you want to try to make Watchmen 2 into a hallmark of the Heroic Age, set it up as a tombstone for the Dark Age that Watchmen started, then get Grant Morrison. If you want to put it up there with Kingdom Come, tell Grant Morrison to get out his epic chops.

The other solution is easier, & maybe...maybe the smart way to go. Just start writing comics about the Watchmen. Put out a Doctor Manhattan comic where you let people like the aforementioned Grant Morrison write weird tales. Let him channel Animal Man or Swamp Thing or Sandman & write a Vertigo Comics house of oddity. Put out a Night Owl in the style of The Sentry, all full of four colour spoofs on the Silver Age. Give Garth Ennis a shot at some Commedian comics. Don't try to make a monumental graphic novel; try to make an awesome line of comics. Come on-- we all know we want to see Doctor Manhattan wrestle The Specter. We all know that the Final Crisis Superman story with Captain Adam should have been about Doctor Manhattan, right? So yeah. Make the Watchmen world one of the "52" Earths. I could live with that.

Or, you know, just ruin everything with bad choices. 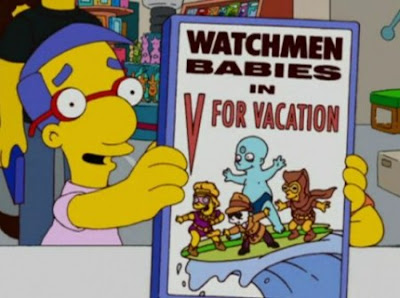