The Secret of the Ooze. 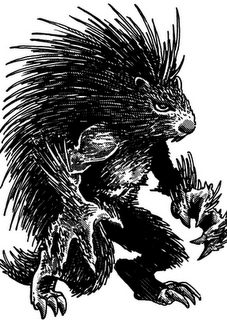 (Taken from TMNT & Other Strangeness, by I think Peter Laird.)

Listen, I kind of have to side with xkcd about furries. I don't get it, some of the practitioners are gross, but like-- there is plenty of stuff that people would otherwise be like "Whatever, Dan Savage is cool with it." Like-- the internet is here to make us cosmopolitan & jaded; so get with it. I mention this because, well, I don't usually care about anthropomorphic animals. I mean, there are whole genres, besides the sexualized ones, that capitalize on it. & yeah, I say: whatever. Except when I don't. See, every so often...it clicks in my brain. Or no, you know what; no. It clicks in the universe. The anthropomorphic animal stuff I like just might be perfect. I'm serious: I'm going to tell you the examples that tickle me pink, & you tell me if you think they aren't the best ever, ever.

Speaking of comics gold, Usagi Yojimbo. Sure, he was in the TMNT cartoon, but that isn't his genesis. In fact, he's a long running comic figure created by Stan Sakai. Usagi Yojimbo is a samurai. Simple, easy, truthful. He is a ronin who epitomizes bushido. He's great, deadly, honorable, & charming. Reading his comics is like watching Kurisawa.

Of course, it we're talking the comic trifecta of anthrpomorphs, I should mention Cerebus. Cerebus is an aardvark; he's also a Conan spoof. Like TMNT, Cerebus had his awkward parody phase, but he then moved on; in Cerebus' case into a sprawling epic. Of course, the problem here is Dave Sim, the author...is a misogynist. Now, at some level that taints his work; but the flip side is, well, Cerebus is kind of brilliant. Problematic, but worthwhile. Delve in, but keep your salt shaker handy; you are going to need lots of grains of salt. Did I mention that Groucho Marx is in this?

Which brings us to Mouse Guard. Oh swoon-worthy Mouse Guard! What you've got here are tiny little mice, itsy bitsy brave mice! Who, with sword & shield, protect their brother & sister mice. James (of this blog fame!) mentioned that he saw the success of the concept being that once you suspend your disbelief enough to anthropomorphize the mice, you don't need anything else. When a human knight fights a dragon, you've got to make your mind big enough to consider "dragon," & depending on the genre or tone, that raises questions along with assumptions. Now, when a mouse knight fights a snapping turtle...well, you have a much better foundation. You know about mice, you know about snapping turtles. When the mouse fights an owl...well, you know that owls eat mice, don't you?

I want to capstone this talking about a classic; one of my favorites. Watership Down. I was recommended this by Kingtycoon, & would have otherwise never peeked into its pages. I am very glad I did! The rabbits of this novel are barely anthropomorphized; they don't have hands, they aren't particularly smart. They count one, two, three, four, a thousand. The thing is, with a subtle use of constructed languages & lapin mythology, Richard Adams convinces you that these rabbits might not be at all like humans, but they are people. Want to talk about brave? Nobody is braver than Bigwig. Want to talk about smart? How could you be smarter than Blackberry-- he knows that wood floats. Fiver is the greatest prophet of all, & Hazel-rah? Hazel is a true son of the Prince with One Thousand Enemies, the god-totem of the rabbits.
Posted by mordicai at 2/09/2010 09:44:00 AM