My Top Ten Films Adapted From Novels No # 2: Up In The Air By Walter Kirn 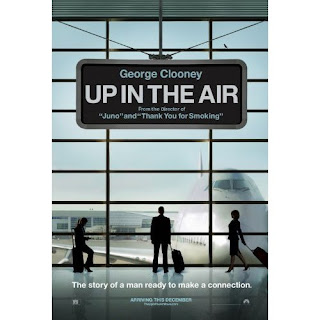 George Clooney's impressive film resume continues in the form of this year's Oscar nominee for Best Picture Up In The Air. From the novel written by Walter Kirn, Up In The Air takes a look at the life of a corporate down sizer who relishes his life of solidarity. Director Jason Reitman and co-screenwriter Sheldon Turner have made a film filled with pain, humor, regret, and redemption. Its story was reworked to reflect the nation's job crisis and does a very good job, as it intertwines real life people talking about the effect of losing their livelihood has on them personally and psychology. The straw that stirs the drink in this film is George Clooney's persona. He infuses a character, that in the book was a neurotic mess, to a charming sympathetic, empty everyman. He's a man who thinks he is above commitment, but there is always that woman who changes the game. She comes in the form of Alex played by Vera Farmiga. She is Bingham's equivalent in every way including her emptiness which shows in an expected way. Including actors like J.K. Simmons, Danny McBride, Melanie Lynskey, Jason Bateman, Anna Kendrick and Zack Galfianakis, Up In The Air is the movie of the moment. Now is that a good thing, probably not, but it does resonate which is always a plus when involving a film. Only time will tell if this movie holds up twenty years from now.
Posted by Dante at 2/13/2010 04:24:00 PM