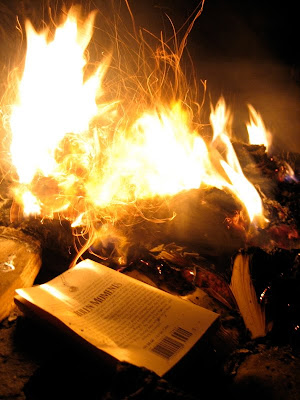 (Image from Wikimedia Commons, by Ryan Junell from Oakland, USA)
How do you stop reading a book? I'll admit it, I'm bad at it, but I am getting better! It used to be that I was one of those who would stick to it, slogging it out till the bitter end. I still vibe with Past Mordicai's logic. "If you don't read things you don't like, how will your circle of knowledge expand?" I mean, yeah. Plenty of readers get stuck at that level, just reading page turner thriller, or page turner dragon books, or page turner romances. The same stuff they've always liked. Now listen, I'm certainly not slogging off on schlock! Nor am I saying that genre is equivilent to schlock. Having a wizard, or kissing people, or a lawyer in your book doesn't mean it can't be literature! I'm stepping away from my points, though. How do you stop? Can you stop?
I'm better now, as I said. If there is a book I'm reading that clearly isn't redeemable-- maybe it is schlock, maybe it just isn't good-- I will sometimes stop. If I've put in a hundred pages & it hasn't redeemed itself, pft, done. I've called it off after fifty pages, even. I'm not talking about a book I didn't like-- those I still feel obligated to finish, per the above logic. I have to finish it at the very least so I can have bragging rights when I heap obliquay on it. I'm talking about bad books. Poorly written, or filled with offensive stereotypes, or jammed with insulting cliches. You read enough of it to figure the lay of the land, the cut of the jib, & I say forget it. Toss it aside!
Now, I am still unable to put down a book after I read a fat chunk of it. I figure, at this point, why back away? Why step off? Plow through! I also won't quit if the book is mediocre, or uneven. If there is the occasional illuminating passage, I'll keep on chopping with my machete. I figure, hey, how many times have I heard about people tossing in the towel before they chopped through the first hundred pages of Lord of the Rings? Even I will admit that a hundo of hobbit parties & pastoral hiking can be a bit grueling. So like I said, I keep on digging. I'm stuck in that rut at the moment, actually: I'm reading Adam's Shardik based on the fact that I really like Watership Down & thought Maya was "meh." Sadly, I'm finding Shardik in the "meh" category. I'm more than four hundred pages in, & I occasionally like it, so what am I to do, throw in the towel?
Posted by mordicai at 2/24/2010 03:52:00 PM