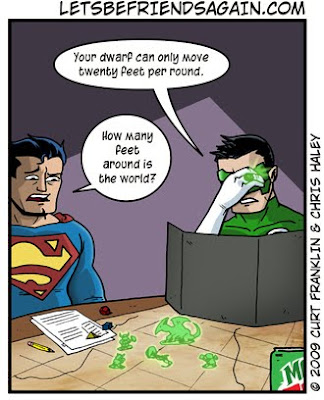 (image from Lets Be Friends Again.)

In the last post about comics I sort of rambled about the deplorable state of female characters in comic books. Now, I meandered all over the place, but it occurs to me that in comics, as in so many things, your easy heuristic for "is this okay?" can be the Bechdel Rule. I want to shift my stream of consciousness discussion on ye olde funny book strips today, to the "other problem" I alluded to.

First though, let me talk about my history with comics; it is fairly narrow, to be fair. My childhood connection with comics is tenuous, at best. There was a fair chunk of Bronze Age comics left from some abandoned childhood when I was growing up-- notably, old Metal Men issues & a few of the less-weird Man-Thing floppies. I was given a few comics here & there to shut up me; random issues with no continuity-- Supreme #4 or one of the X-comics with Stryfe in it. My point being, I didn't really have a connection to comics. I wasn't a collector, a hoarder, a reader, even. Sure, I liked Batman, but I didn't know enough about comics to realize how much better Superman was than Batman (he's better. If you don't think so, know that I understand, but you are wrong). I played the Marvel Superheroes Role Playing Game with all its Stupendous! Amazing! Shift Z! feats, & while I knew that Captain America had his unbreakable shield, & that Black Panther lived in Wakanda, I didn't really know it, in that visceral part of my bones. I was a gamer geek, not a comics nerd.

When I was in Junior High, I convinced my Gifted class to go to a lecture at the local university about J.R.R. Tolkien. It was there where I first heard the names Alan Moore & Neil Gaiman invoked. I scoffed. "Sandman?" I said, "that lame Spider-man villain with the stupid shirt?" Which marks my turn into Vertigo. How I slipped into the graphic novel web! Sandman took all the pocket change out of my...well, my pocket. A summer of back of house work at a steak house, gone! Watchmen started explaining WHAT I was reading in the first place. It started coming together, but still, I was just dilettanting around. Nothing particular, nothing special. I knew a couple of big names, just a bandwagon fan! I started borrowing weirder stuff, like Cerebus, but was still lurking in the fringes.

At Shakespeare & Co., when I first started working there, there weren't any comics. Maybe a copy of Watchmen, but that was the start & finish of it. Still, one day the imp of the perverse came upon me. I ordered a slew, a whole shelf worth of comics! I had been talking about them with some of the other Shakers, & we'd started looking up the confusing pedigree of people like Klaw on Wikipedia. Madness-- just madness. So I ordered a shelf of comics...& they sold! So I slowly infringed on another shelf, till I'd nurtured two shelves. & at this point, I was reading the trade paperbacks, really getting into it. JACK KIRBY! He blew my mind. Still does. I was paying my dues, reading the old classics & the new. Two shelves grew & grew until it took over a whole book case. Nice, choice, shibby! & then David & Peter started buying floppies, & I started mooching reads off them; suddenly we were not only rooted in the fundamentals, but current & up to date? We had opinions about the greatest & the worst!