Alone Cannot It You Resist. 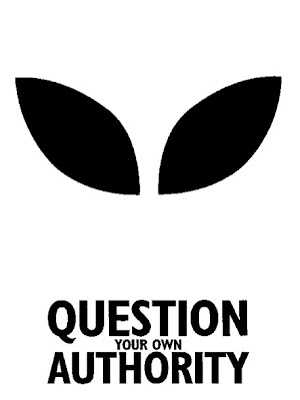 Happy Valentine's Day! Valentine's Day is popularly derided as "an invention of greeting card companies" &c, when in fact it has its whole own crazy past, &--well, if we're talking invented holiday's it is easier to start with stuff like X-mas or Easter; you know, really fake ones. Or for that matter acknowledging that all holidays are made up, since applying arbitrary value to the planet's rotations is, well, silly. Your equinoxes & solstices are at least a little less crazy...anyhow, my point being, I got my wife some nice presents. & then started thinking about Schwa.

The Schwa Corporation is not trying to take over the world. They already have done so. The Schwa Corporation is providing what you want; they are true capitalists. They provide Dominance when you are Submissive; they provide Control when you in Doubt. Calm when you are Happy. Same when you are Other. Pay no attention to the persistent iconography of wide-eyed otherworldly invaders. Pay attention. Hallucination is reality is hallucination is reality. You could be a winner!

If Schwa's message of Soma & Room 101 isn't to your liking, maybe Counter-Schwa (a division of Schwa!) is for you. Counter-Schwa resists Schwa at every turn, & is a fully accredited shareholder in all Schwa activities. With the full support of parent company Schwa, Counter-Schwa is involved in the cutting edge of Resistance Markets. Counter-Schwa will provide you with the tools to Dominate when others are Submissive, to Control those who Doubt, to Calm the Excited, to make others finally see the logic in your arguments. To join you in the struggle against Hated Oppressor (tm) Schwa Corporation.

Schwa is the brainchild of Bill Barker, & has gone through many phases. Bill Barker has issued "Schwa Credit Cards," which, when you mailed them to you, he returned-- with schwag in the bag, such as stickers, post cards, whatever. His real power lies in the ability to perfectly coin slogans with a deeply resonant & recursive message. & that face? The grey alien stare? It is his stylized version that really anchored it into the public mind. Schwa, you see, is bigger than Bill Barker. Bigger than arbitrary days used to control the population to accommodate consumerism & gender segregation. Schwa Is.
Posted by mordicai at 2/14/2010 11:02:00 AM