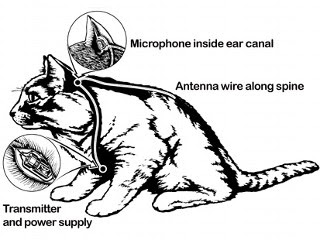 Acoustic Kitty was "a CIA project launched by the Directorate of Science & Technology in the 1960s attempting to use cats in spy missions. A battery and microphone were implanted into a cat and an antenna into its tail. Due to problems with distraction, the cat's sense of hunger had to be addressed in another operation. Surgical and training expenses are thought to have amounted to over $20 million.

The first cat mission was eavesdropping on two men in a park outside the Soviet compound on Wisconsin Avenue in Washington, D.C. The cat was released nearby, but was hit and killed by a taxi almost immediately. Shortly thereafter the project was considered a failure and declared to be a total loss."

Email ThisBlogThis!Share to TwitterShare to FacebookShare to Pinterest
Labels: OMG, the more you know, WTF