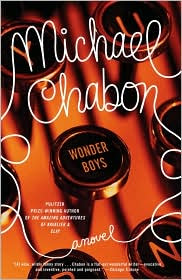 Take one professor looking to find literary magic once again. A book editor with a predilection for trannies and talented but mendacious young male students. A pregnant mistress. A blind dog. Marilyn Monroe's missing jacket. And one disgusting yet compelling red robe. You've got Michael Chabon's Wonder Boys. Adapted by the current go-to guy of book adaptations Steven Kloves and directed by Curtis Hanson, Wonder Boys is perfect in its tone from beginning to end. The main character Grady Tripp is at a crossroads personally and professionally. In one weekend Grady Tripp must take the initiative to act on want he yearns for most or nothing will change for the better. To help Grady along his weekend odyssey are an eclectic group of confidants and acquaintances. The plot of the movie is something I enjoy a lot because there is no plot. Reminiscent of films of the French New Wave. It's structured around things just happening. Happenings created by affable and well-drawn characters. A high point for me in the film is when Grady and Crabtree break James Leer out of his grandparents' house and take him back to Grady's house. Besides being a possible lay for Crabtree, Crabtree sees potential in Leer has a writer. As they go off to get to know each other a little better, Grady is left only to contemplate. Enhancing the moment is Bob Dylan's Not Dark Yet. The song fits like a glove. When released in 2000, Wonder Boys came and went. Allegedly, Michael Douglas was disappointed that the film didn't get much recognition that year. I agree with him completely. With this film it is a question of where do I go? What is next? Have I fulfilled my potential? Will happiness ever shine on me? If these are questions you have maybe you are a Wonder Boy.
Posted by Dante at 1/09/2010 02:22:00 PM