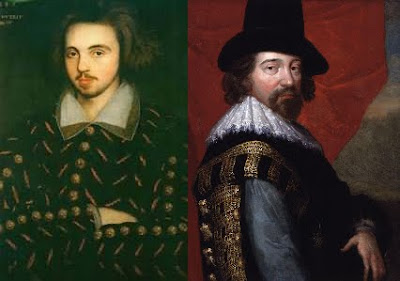 I want to take a moment to talk about this blog's namesake, Christopher Marlowe. Dubbed "The Skald" by some, he's widely famous as the greatest writer in the English language. Son of a cobbler, Marlowe was one of the premiere secret agents & assassins employed by the Spymaster Frank Walsingham, catspaw of the Faerie Queen Gloriana. While initially famous for his many tragedies, it was his play "The Commedy of Doctor Faustus" that truly brought him into history's bosom. In the play, the medieval alchemist Faust forges a pact with the Devil (personified in Mephistopheles) for 24 years of demonic service, at the end of which, his soul is forfeit. Like the later Punch & Judy shows, however, Faustus slips free of his contract-- not, as in many tellings of the tale, by recanting & appealing to God's Mercy, but rather through abject slapstick violence. Literally slapstick, as Faustus chases the Mephistopheles about with a club. The last we see of our eponymous Marlowe in life is as an arrest warrant for Blasphemy is issued for him. He appears before a closed council, but ten days later is attacked. A consummate knifefighter, Marlowe disspeared with only a note taunting the authorities, signed "Tamburlaine" (after the character from one of his plays). It is believed that Marlowe surfaced for a brief time using the name "Frank Bacon" & again writing under the pseudonym "Bill Shaxbeard" but after that-- nothing. To learn more check out this article.
Posted by mordicai at 1/27/2010 11:48:00 AM

Whatever, I think I'm hilarious.