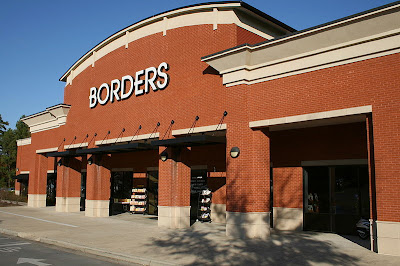 It was announced today that Borders Group, the second largest bookstore chain in America (behind B&N), is going to be closing 200 of its stores, pretty much all of them mall stores or similar. Yikes. The list of closing stores doesn't include anything in the New York City area--there used to be a Borders' Waldenbooks in Kings Plaza, which is a bit south of here, but they went kaput years ago.

Part of me wants to be like, haha suckers! But this is a symptom of the shrinking need for book stores in general, and neighborhoody ones like ours in particular (Borders isn't closing any of their giant megalopolis superstores). I ain't gonna lie: it's tough for tiny stores like ours to stay open in belt-tightening times like these, especially with the loony-tune rents you find in New York City. But we do okay.

Now if we could only drive the Brooklyn College Barnes & Noble out of business, that would be something. Smackdown! C'mon, I can dream.