My Top Ten Films Adapted From Novels #5: Out Of Sight By Elmore Leonard 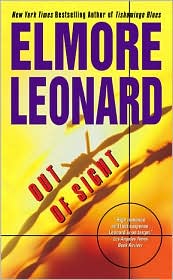 Stylish. Sexy. Cool. Steven Soderbergh's comic caper announced him as a director of immense skill and talent. Flawlessly adapted by Scott Frank in a non-linear narrative, Out Of Sight follows a bank robber along with his friend and accomplice on their quest to rob $5 million dollars in uncut diamonds from a former white collar inmate. It doesn't seem like the movie was made in this contemporary era of film. I could see Howard Hawks or Billy Wilder taking this story, these characters, and creating a classic by adding their own sensibilities to the film. One of the most important things in film is casting and this film hit it out of the park. Don Cheadle. Dennis Farina. Albert Brooks. Ving Rhames. Steve Zahn. Viola Davis. Isaiah Washington. Jennifer Lopez. George Clooney. Lopez and Clooney work well together. They work very well together. It is there obvious chemistry that adds a bit of fire to the mix. Both of them are made for their roles. This was the role that made George Clooney a leading man. And to this day he is the closest thing we have to Cary Grant in films today. Highly underrated and neglected by the studio, Out Of Sight doesn't follow the formula of what a story is suppose to be. No one changes. It's just fun entertainment. It's what a good story is made of.
Posted by Dante at 11/28/2009 11:25:00 AM