My Top Ten Films Adapted From Novels #6: Do Androids Dream Of Electric Sheep? (AKA Blade Runner) By Phillip K. Dick 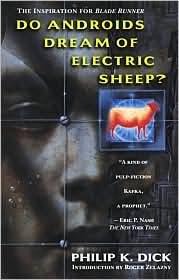 "We need ya Deck. We need that old magic." Delivered with potent creepiness by character actor M. Emmet Walsh, is one of the many reasons why I have an affinity for this Sci-Fi classic. Directed by Ridley Scott and adapted by David Webb Peoples, Blade Runner is a feast for the eyes and its story makes you think long after the credits roll. Harrison Ford is Rick Deckard whose job is to track down and kill replicants, thus the name Blade Runner, who have come back to earth seeking to find who created them. Some might see it as just a cop movie on the surface, but it's more than that. In between the gripping action and suspense, is the question of where do I belong in the world? Where do I fit in? Is a Deckard a replicant? What happens to Deckard and Rachael? You be the judge.
Posted by Dante at 11/21/2009 11:46:00 AM