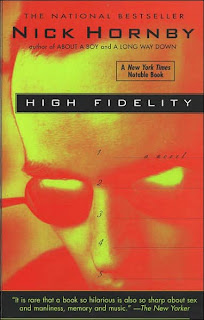 The newly single man with broken heart manifesto. No one delves into the mind of the male species like Nick Hornby and when it comes to the subject of the breakup, nothing but pain, insecurity, and hilarity ensues. Adapted by the same writers who gave us, Grosse Pointe Blank, John Cusack plays thirty-something record shop owner, Rob Gordon. To many he's the grown-up version of Lloyd Dobler, which I can understand. A recent breakup with his long time girlfriend Laura has him recounting his top five list of breakups to examine what went wrong. Through this journey comes an awareness of fear. Fear of what a man's limits are in a relationship and conquering that fear as not to let it hinder what could be with that special someone. Not only for Cusack's character is this a revelation but for his two record shop employees the rock snob played by Jack Black and the understated underachiever Todd Louiso.
I would have to say my favorite part of the film is its ending sequence giving us all thoughts of the somewhat antiquated notion that when we fall in love it will be forever.
Posted by Dante at 11/14/2009 12:47:00 PM