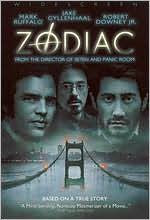 Underrated. Underrated. Underrated. Director David Fincher's Zodiac
is easily one of the best films based on a piece of non-fiction work in a long time. It's sleek. It's gruesome. It's unflinching. It chronicles the investigation of the Zodiac killings that terrorized the San Francisco Bay area in the late 60's - early 70s. Although the film is named after the killer, it never focuses on Zodiac himself. We follow the reporters and detectives whose lives are taken over by the killer's exploits. Along with the richness of the film's look, I mean it is a beautifully shot motion picture, its casting is one of the high points. From stars like Robert Downey Jr. and Jake Gyllenhaal to superb character actors like Mark Ruffalo and John Carrol Lynch, each of the actors provide subtle on-point performances. If you know the story of the Zodiac Killer, then you know how this film ends. We are trained to believe in perfect endings, but this ending fit. It fit the tone of the film and it bookmarked a film void of sentimentality. Void of bravado. Full of intrigue and grit.
Posted by Dante at 11/07/2009 12:58:00 PM