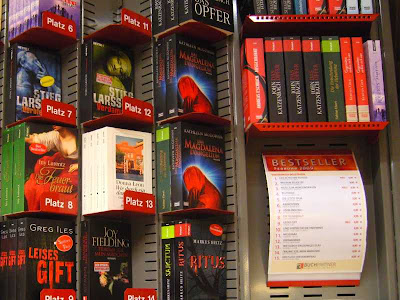 This week, the Wall Street Journal started running its best-seller lists using numbers from Nielsen BookScan, a data provider who tabulates retail book sales. This is major because it positions them as major rival to the New York Times' venerable Best Seller Lists, and more importantly questions the need for bestseller lists at all.

I'm gonna tell you a secret. Seriously, pay attention: "best seller lists" in papers like the New York Times? They're made up. They're cobbled together from a small sampling of booksellers who send sales reports to the NYT, and the paper extrapolates from those trends. Exactly how they extrapolate is not known--they do not disclose their methodology as they consider it a trade secret--but the New York Times Best Seller List is not actually a reflection of the real number of copies sold. People who work in the industry, publishers, booksellers, know that readers read the NYT's list and will buy books based on it, but when people in the biz want to see how books are actually selling? They look at BookScan.

Now, for a long time, educated guesstimating was the best you could get, so it didn't really matter that the NYT lists weren't 100% accurate. Enter BookScan: a giant basking shark that sucks in data from as many retailers as will give it to them, which is a lot. Not to say that BookScan is perfect--it doesn't take into account the sales of certain very large retailers (Wal-Mart, for one)--but when a system exists that analyzes the largest possible sample of actual sales numbers, what's the point of other lists?

BookScan was widely expected to be a failure, in the way that absolutely reasonable & clearly viable models were expected to fail-- i.e. in the face of The Grey Lady or establishment journalism. Not like Nielsen is a small name? But no one expected it would work. Because people are weirdly conservative & stupid sometimes.

On the flipside, it also allows competitors to see how each other is doing. Which is interesting.

Also the numbers in BookScan are no where near accurate. NEARER, sure, but still, take with huge grains of salt.

Yeah, I get that BookScan isn't omniscient, but I think it's clearly on the right track, and is only going to make lists like the NYT seem more and more archaic and superfluous.

Well, I'm not convinced; there is something to be said for the...handscrafted approach to information. That is to say, MEANING versus DATA.