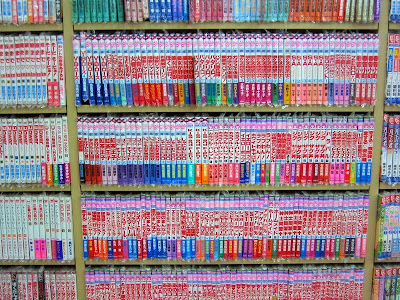 It was announced over the weekend that Meiji University in Japan is planning to open a library dedicated to the study of manga--the first, as far as I am aware--with a planned collection of two million items of comics, animation, video games, &c., dating back to WWII.

Library official Susumi Shibao told the Agence France-Presse: "Manga has been taken lightly in the past and there has been no solid archive for serious study." True! I don't get manga, like, at all. Even a little bit. But we're all nerds here, and familiar with the critical prejudice against sci-fi, comics, Harlequin romance, books focused on werewolves and vampires making out, &c., &c., as "less legitimate" literature. So it's good to see such an undertaking happening. When they start interviewing applicants for "Dean of Superman Studies" here in the US of A, I'm just letting everyone know right now: I'm available.