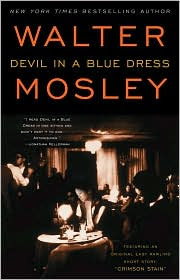 Director/Writer Carl Franklin, whose credits include One True Thing, A False Move, and the upcoming HBO Miniseries The Pacific, focused his talents on bringing to life Walter Mosley's Devil In A Blue Dress. He succeeded more than admirably. Capturing the noirish atmosphere and tone of Postwar Los Angeles, Franklin orchestrates his cast through the detective story with ease. A story about a missing white woman who's the girlfriend of a mayoral candidate. Our leading man Easy "Ezekiel" Rawlins is played by Denzel Washington. At the peak of his acting prowess, Mr. Washington commands the screen. Although there are aspects of Easy's life that were omitted from the film, you never feel cheated. He's a man looking to provide for himself even though his surroundings might dictate otherwise.
In this sort of film, supporting characters are very important. They have to be unforgettable and compliment the protagonist. For Easy Rawlins, Mouse Alexander, played by Don Cheadle, fits the job and does it very well. Dangerous. Violent. Funny. These all describe this character. When things are getting a bit too much for Easy to handle on his own, he puts in a call to Mouse in Texas. He steals every scene. I'll go as far as to say he steals scenes from Denzel too. Denzel, like I'm on a first name basis with the cat.... anyway to some the story doesn't match with the tone of a noir film, Mosley's stories always have a socio-political message within the car chases, the gun shots and sultry love sequences. In 2010, there's supposed to be another Easy "Ezekiel" Rawlins story hitting the big screen called Little Scarlett. Hopefully audiences will get to experience the underappreciated works of Walter Mosley.
Posted by Dante at 10/31/2009 11:46:00 AM