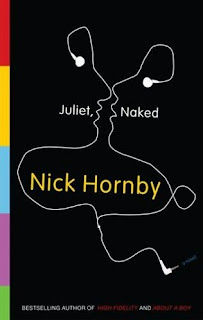 Let me be straight with you, here: I really, really, really like Nick Hornby. The themes of High Fidelity (the basis for the pretty popular and pretty excellent John Cusack movie from a few years ago, with the unexpected side-effect of introducing the world to Jack Black) -- specifically; retail hell, excessive nerdiness, and the mutation from man-child to functioning adult -- are themes that appeal to me, by Jove. They're also, coincidentally, the themes of most of his novels, in one shape or another.

Juliet, Naked is probably the most exasperatingly Nick Hornby ish novel that Nick Hornby has ever written, and some of his most well-loved trods are followed faithfully. To wit: Juliet, Naked is about a washed-up Morrissey-ish song-writer who retired from music in the 80s and never quite became an actual grown-up, and the long-time girlfriend of his biggest, most obsessed modern-day fan, none of whom ever quite became actual grown-ups. See what I mean?

Readers familiar with Hornby will know what to expect -- his novels are, at their most elemental, romantic comedies. This doesn't mean they can't be really good romantic comedies, but describing them as anything else is at the very least slightly disingenuous. Maybe most striking about Juliet, Naked is how dark it is; or, at least, how Hornby's aging is evidenced in his writing (he turned 50 between the publication of his previous novel, Slam , and this one). This novel is, maybe contrary to what I just said, not so much about music as it is about getting old, wanting children, failing the children you do have, and the re-evaluation of wasted lives. And, well, also the internet. Quite a lot of it is about the internet and the odd, obsessive people who live there.

So, that's pretty bleak, and characters spend most of their time examining and re-examining their lengthy histories of failure, and when it's all finished the ends don't tie quite together quite so neatly. Still, that's to be taken as a plus, as far as I'm concerned; Hornby characters are idiosyncratic but seldom bland, and almost always likable. Tucker Crowe and Annie -- that's the washed up rock-star and the rural English girlfriend -- are both believable and endearing, and even Duncan (that's the obsessed fan) conjures some vague sort of affection; this despite being essentially worthless as a human being.

But, then, that's what Hornby usually does, and does well: make you care for people who are, like most people who are worth caring about, in some way fundamentally broken.

I got both this and a book called "The Actor and the Housewife" by Shannon Hale at BEA. They were interesting to read close together because in many ways they're the same story, with Actor and the Housewife being a little lighter and more ready for easy film adaption. Shannon Hale is a big name in YA books, but I don't think this adult book has gotten much attention.