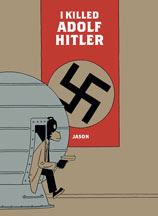 My fondness for alternative comics is not well documented, because mostly I actually kinda hate them. When it comes to illustrated literature, I typically need people to be wearing capes, or trying to blow up the Earth, or both. Also I'm perhaps prejudiced against artists with one name who don't live in a giant purple mansion in Minnesota. But every once in a while I go off the rez and find myself happier for it. This book was one of those occasions. There's really no way to explain what this thing is without spoiling it, even though its plot is largely nonsensical. A deadpan-hip time-travel story featuring an anthropomorphized cat hitman (hitcat?) Oh, and it's also a story about being in love and growing old together with someone? In the future/past. Uh, yeah, sure, why not. Pour me another.

So, aside from all its aggressively quirky quirks, this is actually quite an affecting and touching tale. I will say: I was moved. And it's true that I'm a soft touch for that sort of thing, but it really captures well certain aspects of falling in love, in a very non-Hollywood and refreshing way, where it's not cliche fireworks, it's kinda hard, and maybe almost accidental. Obviously, its other message is that being in love means helping the one you love kill a genocidal 20th century dictator, which is as it should be.

The only drawback is that it takes maybe ten minutes to read, tops, and, while pleasurable, is an entertainment of no greater duration than your average issue of Batman. Or Usagi Yojimbo, if you are not of the cape-loving orientation. It reads like a very long newspaper cartoon in your alternative weekly of choice. You can argue about whether I Killed Adolf Hitler offers a more sublime set of pleasures, but--yikes--the book lists for more than four times an issue of reg'lar comics, at $12.95. And ~$1.25 per minute is a pretty steep investment for any literature these days.
Posted by David at 10/20/2009 03:16:00 PM