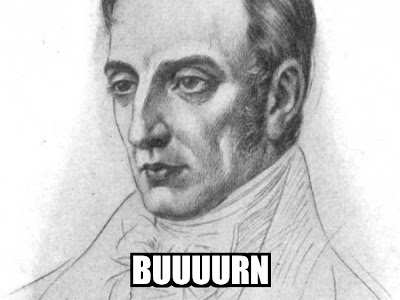 ITEM: A collection of letters in which English Romantic poet Lord Byron calls his most noted Romantic colleague "William Turdsworth" was sold at auction by Sotheby's yesterday. He also talks smack about Christianity ("The Basis of your religion is injustice"), and praises the Portuguese ("[they] have few vices except lice and sodomy"). The parcel of letters ultimately went for £277,250. Given the exchange rate, and the current health of the U.S. economy, what is that? Like a billion dollars?

ITEM: Phaidon Press is opening a new "pop-up" bookstore in SoHo. What the heck are pop-up stores? Sadly, not a store specializing in pop-up books. It's a store that's only open for a few weeks and then closes forever. Kind of like those people in the mall who sell porcelain cats and embroidered pillows around Mothers' Day. Rizzoli did one a little while back. I think it's mostly suited to the bookstore-as-giftshop approach to bookselling, which is why it only seems art-book publishers are doing it.

ITEM: Recipients of the Whiting Writers' Award were announced today. The Whiting is awarded to new, "emerging" authors of fiction, nonfiction, poetry and plays. The cats on the list of winners are, unsurprisingly, unknown to me, but I'll have to check some out. And while Rajiv Joseph is originally from Cleveland, he's now a Brooklynite. Go Brooklyn.

ITEM: J.R.R. Tolkien is officially the highest-paid dead writer, and no doubt a source of infinite inspiration for dead writers everywhere.