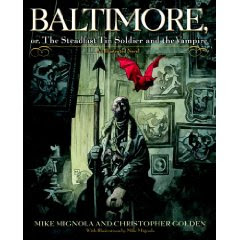 Vampires are big these days.
You may have noticed.

You've either read or chosen not to read most of the big contenders, but the "Great Vampire Rush of 2009" isn't all there is. Here, in no particular order, are five novels you might want to check out.

You might recognize Mike Mignola as the creator of Hellboy (and the comic books, and the movies...). He also put together Baltimore, the story of a WWI veteran's quest to slay a vampire. As gritty and weird as the rest of Mignola's work, this old-school vampire hunt is also illustrated throughout by Mignola himself.

And oddball classic of pulpy horror, Necroscope follows the exploits of a young Necroscope -- that is, a guy blessed/cursed with the ability to speak to the dead -- recruited by the supernatural arm of the British Secret Service which specializes in "ESPionage" (yes, that's what they call it" in order to stop an ancient vampire and his Soviet minions. If that doesn't sound sufficiently crazy, I don't know where else to send you.

Octavia Butler's dissection of the vampire mythos is well-known for reason -- as equal parts vampire novel and exploration of race and gender politics, Fledgling, the story of an amnesiac 11-year-old (???) "vampire" has long been one of those genre novels suitable for "serious" discussion.

High-octane action from the author of the equally over-the-top Monster Island. 13 Bullets was originally published in installments on the author's blog, and is certainly paced to move. Bullets puts a spin on the traditional vampire story by setting it in a world where vampires are known to exist, and the task of hunting them falls to the Federal Bureau of Investigation -- and the FBI's best vampire-hunter is the aging, hard-as-nails Jameson Arkeley. 13 Bullets, the first of a series, is also notable for its monstrous, shark-like depiction of vampires -- so if you're just about tired of your vampires wearing their weight in make-up, it's worth checking out. 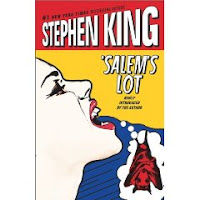 Written way back in 1975, Salem's Lot -- only the second novel by King -- hasn't been fresh and new for about thirty years, but that doesn't make it any less awesome. Hefty and massive (although a little more manageable than King's later brick, The Stand), the novel concerns the town of Jerusalem's Lot and the numerous problems that pop up when you have a vampire hunting your town and turning your neighbors into 'vamps' with increasing frequency. Salem's Lot was re-published in 2005 with illustrations and fifty some-odd pages worth of deleted material.
Posted by James at 10/28/2009 07:40:00 PM

Haloweeny! Though the tag is a little hyperbolic, with Stevie King in there. I've not read that, or the Butler, but the others oh yes!